Great.
I just watched a trailer for a new film about “christians” being persecuted in America.
It’s imaginatively titled “Persecuted.”
As a person of faith in Jesus, I grow weary of this self-induced paranoia.

These extremist groups keep crying “Religious Freedom,” when that’s the last thing they want!
Most right-wing fundamentalist evangelicals have made it abundantly clear that they only want freedom for THEIR religious views.
They don’t want everyone to be saying Buddhist prayers in our schools.
They don’t want people swearing on the Quran in our courts.
They don’t want homage paid to Shiva during our sporting events.
They don’t even want to acknowledge the millions of Christians who disagree with them.
So let’s call their cry for religious freedom what it is:
Bullshit!
They’re not talking about freedom. They’re talking about privilege.
Privilege for a particular segment of a particular form of a particular religion.
What they actually want is a Dark Ages system of Church/State control and forced religious compliance.
They are as far from the heart of God as were the Pharisees.
There are Christians that suffer real persecution (including torture and death) for their faith, and these prophets-of-doom extremists are an insult to those truly suffering.

“I hear they won’t let Christians get married. And that gay bakers won’t make them cakes. And that they have special programs that can cure them of being Christians. And that there are lots of homeless Christian kids in America because their gay parents reject them when they come out as Christian…”

Movies like this cater to the lowest common denominators of elitism, religious superiority, quasi-faith and simple fear.
They are desperate calls to rally the troops of a dwindling and hopefully soon dead cultist belief system that’s scratching and clawing for it’s final breath.

The makers of this celluloid dung should be ashamed of themselves for feeding these fires of self-importance, delusion, and devotion to a false and dangerous view of God. A view that is in direct contradiction to the teachings of Jesus.

Sadly, this ear-tickling movie will probably do well at the box office.  We can only hope and pray that more and more people of faith will speak out against this kind on nonsense, and toss it in the garbage along with the “Left Behind” movies and the propaganda of the Westboro Baptists.
– df 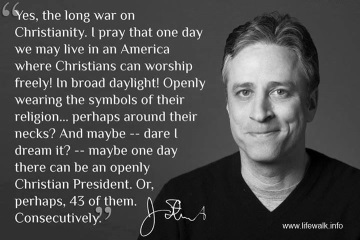