Filed under: Religion,Social Issues,The End Times — lifewalkblog @ 4:40 am
Tags: 2012, Armageddon, by and by, end of the world, end of the world as we know it, endtimes, fear, kingdom of God, last days, paranoia, prediction, Y2K

I’ve just finished reading another article about the year 2012.  Here we go again.  I’m so tired of this crap.
So many were sure the year 2000 would do us all in.  Y2K had the country worrying about computer crashes bringing the world to a technological end, if not a complete end.  I remember telling people I thought 2000 would come and go just like every other year.  It did.

I think people, for some reason, like instilling fear.  It’s like some kind of perverse game.  Just look at the dozens of  “Beware” of  this-or-that emails forwarded.  Ninety-nine percent of these are sheer fabrication.  People just blindly forward them on, without checking them out.  I especially hate the ones that falsely include the tag “I checked this out on Snopes, and it’s legit.”  Well, I check them out on Snopes, and they’re usually NOT legit.  Forwarding these things is a total act of irresponsibility.  So is using scare tactics involving the calendar.

How many hundreds of years of false predictions will it take for people to wake up?  Remember “88 Reasons Why The Rapture Will Be In ’88?”  I think they’ve had one every year since.  In my research, I found a list of failed end-of-the-world predictions, starting in AD 30.  Sextus Julius Africanus had predicted Armageddon at 500 AD.  Charles Wesley predicted 1794.  On and on and on.
Some Christians seem to wear this paranoia like a badge of honor; like it somehow serves or pleases God.  I’m convinced it certainly does not.  If anything, it detracts from the central message of Jesus.

Could 2012 be “the end of the world as we know it?”  Sure.  So could tomorrow.  But concern over the end of the world gives us the wrong focus.  This all distracts from how we are to treat other people.  It distracts from how we are to treat the earth.  After all, the world’s going to end soon, so who cares if I dump my trash in the street!  It takes our minds off of important things, like social injustice, hunger, and other areas where we are to be the “salt of the earth.”  It ignores, or worse, violates the part of Jesus’ prayer that says “on earth as it is in heaven.”

How are we to live today?  The answer to that question shouldn’t change whether the world ends in 2012, or tomorrow, or ten-thousand years from tomorrow.

Filed under: Relating to God,Religion,The End Times — lifewalkblog @ 5:52 am
Tags: Armageddon, end of the world, end times, prediction, rapture, the end is near 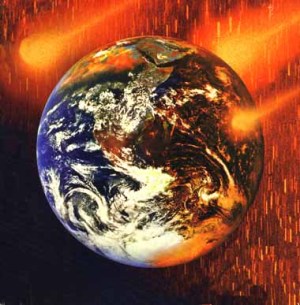 Here are just a few ways in which prediction addiction and end-times anxiety is harmful and toxic:

• It distracts from the central message of the gospel — that Christ died to save the world.

• It discourages Christians from serving other human beings and improving the world around them.

• It is based on, and encourages, unsound and speculative interpretation of the Bible.

• It discourages responsible stewardship of the environment (the world will end soon, so why bother?).

• It focuses on human personalities, pundits, prognosticators or preachers who must constantly reinterpret prophecy in light of changing world events.

• It encourages legalism — promoting what you can do to escape the Tribulation.

• It encourages Christian isolationism and escapism.

• It motivates based on fear (saving one’s self), rather than love.

• It produces an unstable faith, which is focused on ever-changing world events, rather than on Christ.

• It burns Christians out. After investing emotionally and financially in end-time predictions, many lose faith and give up on Christianity when those predictions fail.

Read the full article by Monte Wolverton at:  http://www.ptm.org/uni/resources/ptmupdate/071309/1.html