[“This post is now part of the July 2015 synchroblog that invited bloggers to write about “Gay Marriage”.]

If we’ve learned anything from history, it’s that religious fundamentalists have rather consistently opposed the heart of God. From the crucifixion, to the stoning of the saints. From the crusades, to the Salem witch-hunts, to slavery and racism, to the oppression of women, to the opposition of marriage equality and gay rights.
The organized church has repeatedly been on the wrong side of history and the wrong side of truth.
Yet the lessons go unheeded, and history continues to repeat itself. The unimaginable cruelty, torture, oppression, and even bloodshed and death have always been justified with “Chapter and Verse.” The Bible and a bloody sword, one in each hand. Using the name of God, but being farther from God than the east is from the west. No matter how much people recognize that the Bible has been falsely used in the past, it’s always “Well, we’re not doing that this time.”
Yeah.
That’s what “they” said.

There is a civil war in this country. I don’t use those words lightly. We were once split between slave owners, and those who sought equality for all. We are again split in fight for equality.  And once more, sadly, it is brother against brother, and sister against sister. Often with both sides praying to God for victory.
Despite the rhetoric, this has nothing to do with “free speech,” anymore than having separate drinking fountains was a matter of free speech.  This is a matter of equality in a multi-culture, multi-religion nation.
To paraphrase Senator Jamie Raskin, “People put their hand on the Bible and swear to uphold the Constitution.  They don’t put their hand on the Constitution and swear to uphold the Bible.” I fear the horrors that await if those who believe this is a “Christian” nation have their way. 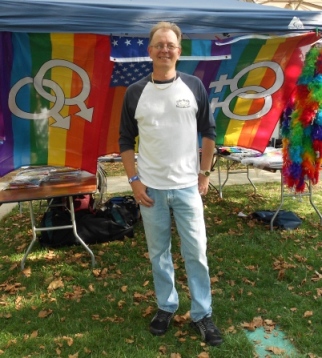 So, here I am. Taking my stand for marriage equality, and LGBT equality in general.

I’m one of those who, as a former fundamentalist, knows the issue from multiple viewpoints.  I know the faulty arguments and misuse of scripture because I used to preach and teach them.
Some friends have been lost.  Some bridges burned.
Accusations of deceiving and being deceived.
I’m sure there will be more of the same. (As an Ex ex-gay, in a mixed-orientation marriage, I get flack from “fundamentalists” on both sides of the isle.)

Mel White has said “Becoming an activist is simply a matter of putting love into action.”  For me, that’s easier said than done.  But being silent is not an option. I’m surprised at where life has taken me; at where the journey has led.  But it is what it is.  By the grace of God and the strength of Christ, I will continue to speak out against this religiously induced injustice.  I will make my small contribution.

Standing with my LGBT brothers and sisters, Here I am.